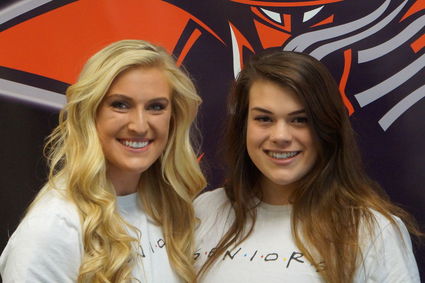 Sidney High School's (SHS) class of 2017 had two students that spent their high school year's striving for the honor of valedictorian.

This year SHS Valedictorian went to Annalise Lecher, with Samee Kaus coming a very close second with the honor of Salutatorian.

Lecher said she has had a lot of success her senior year, making it to state in the three varsity sports she played on.

"It was kind of like the cherry on top of the sundae," Lecher said.

However, Lecher had to put in countless hours of work to accomplish all she has this year. Balancing sports and academics in a rigorous schedule.

When she finds free time Lecher says she enjoys playing club vollyball and hanging out with friends.

Lecher lives in Sidney with her parents Timothy and Alisa Lecher and two younger brothers, Christian and Deitrich.

"I have always been a Red Raider," Lecher said.

Lecher will be attending the University of Nebraska-Kearney for two years of general studies before attending a college in the southern states for hospitality and tourism. She hopes the travel and tourism field will give her the freedom to "spread her wings" and use her creativity.

SHS Salutatorian Samee Kaus hails from family of educators that helped push her focus in academia and education.

"I had hoped for valedictorian, however salutatorian is an honor," Kaus said.

Kaus holds many titles in her career as a competitive power lifter. Holding the state record in Nebraska and Colorado for her division.

When she is not working on her education, Kaus said she can be found in the gym and likes to spend her free time reading and spending time with family.

Because of her hard work, Kaus will be starting college at the University of Nebraska-Lincoln as a sophomore.

Kaus plans to major in business administration with a minor in exercise science.

Both Kaus and Lecher are active in the community and enjoy volunteering to help others.

They will give their valedictorian and salutatorian speeches this Sunday at the SHS graduation ceremonies in Sidney.