Ladies Treated to a Day Out 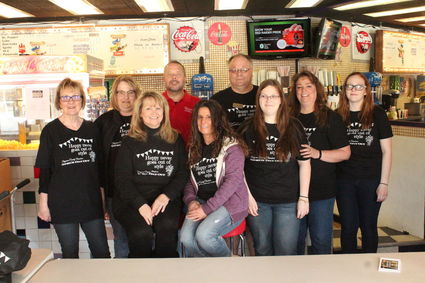 Chamber staff, Fox Theater staff and volunteers are pictured after helping hand out coupon bags at the theater Saturday morning.

While the Friday storm was still melting and nearby highways and interstates still closed from the heavy snow and wind, Sidney businesses were experiencing an influx of ladies visiting area stores and services for Sidney's 11th Ladies Day Out.

"Basically, it was a way to promote our businesses," said Sandy Goble of the Cheyenne County Chamber of Commerce.

This year, the numbers were down because of the storm -- several merchants as well as out-of-town shoppers could not make it to Sidney because of the snow -- but retailers were still pleased with the turnout. Goble said there were about 150 shoppers, based on the number of coupon bags purchased.

"They (merchants) were very pleased with the traffic," she said.

Goble said some ladies were surprised at what Sidney merchants have to offer.

The day started with participants stopping by the Fox Movie Theater to purchase their bag of coupons and gifts. The bag also included a card that is to be signed or stamped at each business they visit. The completed cards are signed and returned to the theater for a chance at prizes. About 60 businesses took part in the event from cash support to prizes and coupons including movie passes for that afternoon.

She said the Chamber is contacting merchants to see if some of the one-day only coupons can be extended. Several bags remain from the event and are being sold at half-price.

The top prize, a helicopter tour of Sidney by Medical Air Rescue Company (MARC), went to Katie Jessen, the Night on the Town package, a limo ride for up to eight people with basket of wine with two Chamber glasses and chocolates, was won by Joan Falcon.