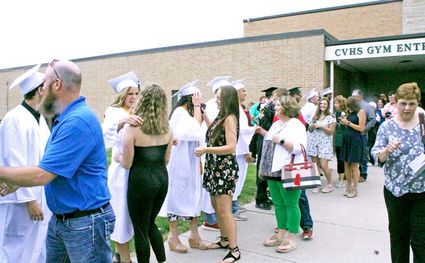 Creek Valley High School graduates met with friends and family after the Commencement service Saturday, May 12.

The best way to succeed in life is to draw your own map, and follow it.

"There is no specific map to success as an adult. However, I will tell you, society does reward those who draw their own map," Howard said.

He added need to remember to enjoy life.

"Always remember to stop and celebrate your successes," he said.

The afternoon started with family and friends assembling in the gymnasium. Displays were assembled highlighting the high school experience for each of the graduates. As the time drew near, the Creek Valley Concert Band welcomed the seniors by playing "Pomp and Circumstance." Senior Madison McFee gave the Welcome Address, followed by the Pledge of Allegiance and a prayer by Jordyn Koenen and Sam Grabowski.

"Eventually, everything comes to an end," she said.

She said the 12 years of public school is finally coming to an end, and it is time for the next adventure.

She recalled memories of growing up with the students in the 2018 class, finishing by saying it is time to move on to the best part of their lives.

"Each of us had our ups and downs, but I wouldn't want to go through it with anyone else," she said.

Valedictorian Samantha Schmid said whether students have been in the school district for the entire 12 years or arrived recently doesn't matter.

"We're here together," she said.

She said visions of the future need to continue being an important part of each person.

"Growing up should not mean you should not pursue your dreams," she said.

She concluded by saying there will always be a bond among the students.

"As we part our separate ways, remember we are connected by heart," she said.

Guidance Counselor and coach Joe Kupper recognized the seniors and their scholarships, noting more than $116,000 in scholarships were awarded as of Saturday. Class President Samantha Schmid and Board of Education President Michael Hansen presented the diplomas. Graduate Michael Smith provided the closing remarks.

"On behalf of the Class of 2018, thank you all. This would not be possible without your support," he said.

Following the recessional, graduates met with family and friends in a receiving line outside of the south end of the gym.