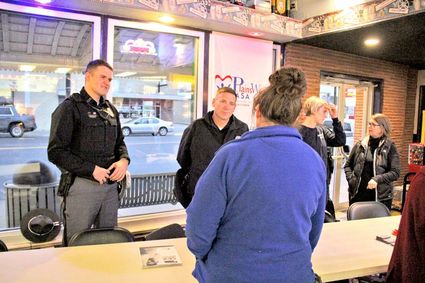 Nebraska State Troopers and members of CASA (right) spoke to patrons at Sidney's Fox Theatre last week before the playing of 'I am Jame Doe,' a powerful film on human trafficking. More than 100 people turned out for the film, shown for free and sponsored by CASA.

When the lights came up, there was no applause. No chatter or bantering or laughter. Just a poinient silence as viewers absorbed what they had just seen.

"I am Jane Doe," a story about the human trafficking trade, pulled no punches as it told the story of primarily two teenagers swept into a world where they were used as commodities – forced to do the bidding of those who had drawn them into that world.

"It's all about control," said Cheyenne County Chief Deputy Fred Wiedeburg prior to the movie's showing. He and other law enforcement personnel were on hand to explain how traffickers take control of the lives of people they use.

Wiedeburg said traffickers are very adept at identifying and manipulating individuals susceptible to advances. They prey on those who are hurting, in trouble, or have low self-esteem.

Once they have drawn the individuals in, Wiedeburg said traffickers use a variety of methods to maintain a position of control. They use drugs, alcohol, physical and emotional abuse – anything to keep control over those they have taken. When coercion and threats don't work, intimidation can be used. The victim themselves may be blamed for the situation, or the trafficker may make light of the situation, denying any wrongdoing has taken place. All of those methods, Wiedeburg said, are used when and however the traffickers need to maintain the upper hand.

The young women in the movie, both 15 years old, were forced into the sex trade. Their "services" were sold online over and over, while they were told no one from their families were looking for them or cared for them. Fortunately for both, however, their families were looking for them, never giving up hope that they would be found alive and well.

One was a runaway. The other, despite her initial misgivings, got into a car with friends even though they didn't know the driver who was offering them a ride. Both regret their decisions, but are thankful their families didn't give up, doing all they could to find their daughters. They were lucky.

But many others are not, among the more than 1.5 million missing people, with an estimated 150,000 thought to have put in the bondage of human trafficking.

In general, trafficking is believed by the public to be used in the sex trade. While that's generally accurate, many others are used as slaves, performing whatever tasks their takers bid.

Also misunderstood is the makeup of the human trafficking trade. Many believe those taken are young girls, lured away by men. But according to information provided by law enforcement officials attending the event, those swept up can be male or female, of all ages, backgrounds and education levels.

The audience was given a breakdown of 22 trafficking survivors recovered on the Omaha-Lincoln area. Of those, 10 were 19-25 years old. Seven were 26-35, while five were 36-47. Education didn't matter. Eight had a GED or high school diploma, six had neither. Five had some college, while two had a master's degree and another a college degree. Thirteen of those recovered were of white ethnicity, four were African American, three were mixed race and two were Latino/Hispanic.

While those statistics come from Nebraska's largest metropolitan areas, officials warned that also is not an indicator. With its proximity to the major travel corridors of I-80 and Hwy. 385, Sidney is among a dozen hot spots for trafficking in Nebraska. Trafficking operations have been identified recently in Sidney, Kimball and Scottsbluff.

Wiedeburg and the other law enforcement officers said awareness is one of the keys to avoiding abduction.

"Know what's going on around you," Wiedeburg said. He said if people will watch their surroundings they can reduce the risk. "When you come back to your car in the parking lot, think if that van was parked next to your car when you went in. Does anything look out of the ordinary?"

By taking notice and reporting suspicious behaviors and people, potential victims can turn a potentially dangerous situation into a safe one.

Following the information presentation and movie, officers continued to remain at the theatre to answer questions. Some voiced how eye-opening the presentation was. Others shared situations they had seen that they now felt could have been observation of someone trying to lure people away.

Those who weren't able to attend the event last week can still see the movie. It is available through YouTube, under a search of "I am Jane Doe."