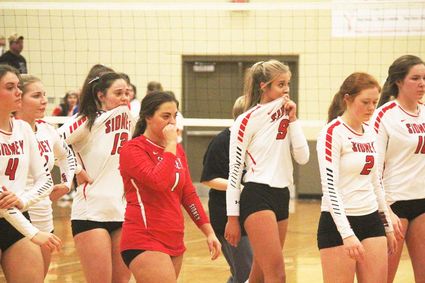 The Lady Raiders show their disappointment after falling just short of rallying from two sets down against the Grand Island North West team.

Sidney's Lady Raider volleyball team faced Grand Island North West in the B-6 District Finals on Saturday afternoon, and lost after a furious comeback from two sets down fell just short in the fifth set.

The Lady Raiders finished their their season with a 26-and-9 record, 5-and-4 in district.

The Lady Raiders started the match slowly in front of a home capacity crowd, as the energized North West team quickly tied the first set after Sidney opened with a 3-to-0 lead and the teams battled back and forth. With the set tied at 22, the North West team was able to win the last three points to ta...