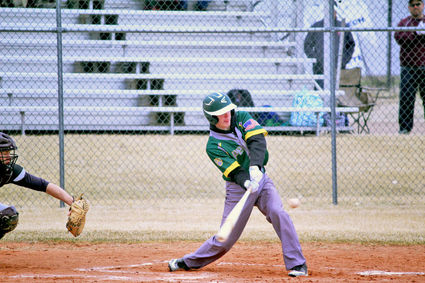 Peetz junior Gus Cowan drives a single in the first inning of the first game of a double header against Merino in Peetz on Thursday.

Peetz's Bulldog baseball team hosted the Merino Rams on Thursday for two games, and lost both contests by big margins. The game time temperature was 40 degrees with a steady chill wind blowing in from the outfield. Remnants of last month's snowstorm still lined the outfield fences, creating a ground rule double if the the ball ended up in one of the drifts in play. Peetz junior starter Mike Turpin had some movement to his pitches, but the cold played havoc with his placement and control, and the visiting Rams jumped on him immediately to start the game. Turpin got his first out by inducing...