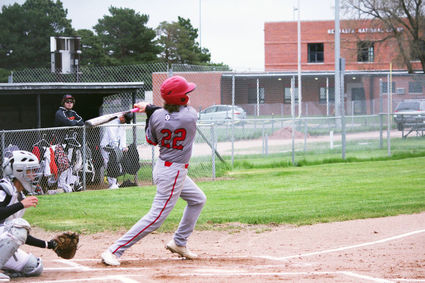 Sidney Legion Post 17 Senior Kyler Lenzen connects with a pitch during recent action. Lenzen and the Seniors beat Bridgeport but lost to Alliance and Gering to place fourth in the Platte Valley Companies Classic tournament in Gering over the weekend.

Sidney's American Legion Post 17 Senior baseball team traveled to Gering to compete in the Platte Valley Companies Classic baseball tournament over the weekend, and the Sidney squad had to settle for fourth place after losing the consolation game on Sunday to Gering, 9-to-1.

Pool play started on Friday, with Sidney facing a familiar opponent in Bridgeport for the opening contest of the tournament. Again, Sidney had little difficulty with the Bombers, winning 9-to-1 with Sam Hashman striking out six over four and two-thirds innings. Sidney had a big first inning, plating four runs to get of...