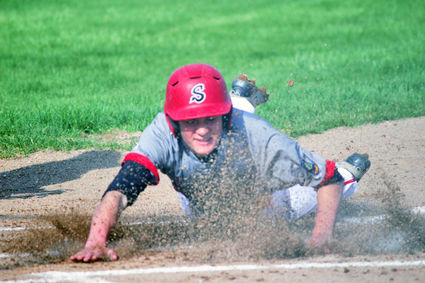 Sidney Post 17 Junior Luke Kasten slides into home to score Sidney's first run in their 7-to-5 victory over Gering on Wednesday.

Sidney jumped on Gering early, after starting pitcher Micah Schneider kept the vistors off the board in the top of the first. An infield single and a triple by Nolan Hofrock plated the first Sidney run, and a sacrifice fly by Dietrich Lecher gave Sidney a 2-to-0 advantage after one inning.

Schneider then retired the side in order in the top of the second inning, and the Sidney offense started again with a Ben Hashma...