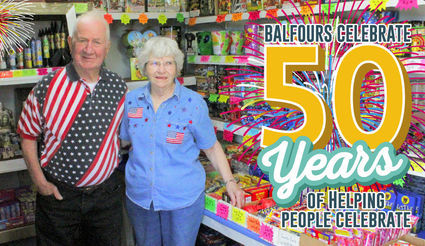 Bob and Carrie Balfour are celebrating 50 years selling fireworks in Sidney. Balfour Fireworks will be open until 10 p.m. nightly June 25 through July 3, and until midnight July 4.

The year was 1776. The action was primarily done in secret, until July 4 when the final wording of the Declaration of Independence was approved and published.

More than 200 years later, the significance of July 4 remains in the hearts of many. Their recognition of the historic significance is still seen in the people lighting sparklers and bursts of color following a family barbecue. In Sidney, the Balfour family has its own legacy, serving fireworks customers for at least 50 years.

Bob and Carrie Balfour have been selling...