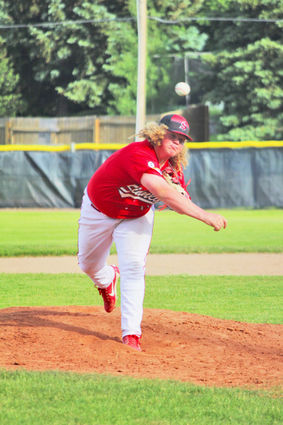 Sidney's Jackson Witt fires a pitch home during Sidney's 15-6 loss against the Buckley Bombers on Thursday.

Sidney's American Legion Post 17 Senior baseball team continued to struggle as they hosted the Alliance First National Spartans Senior team on Tuesday and followed up with a double header against Buckley on Thursday at Legion Field.

Dante Peterson made the start for Sidney, and immediately got into trouble giving up a lead off infield single followed by a sacrifice bunt to give Alliance a runner in scoring position with one out. On a 3-and-2 pitch, the Spartan's JJ Garza went deep with a home run over the right centerfield fence to put Alliance up 2-to-0 early.