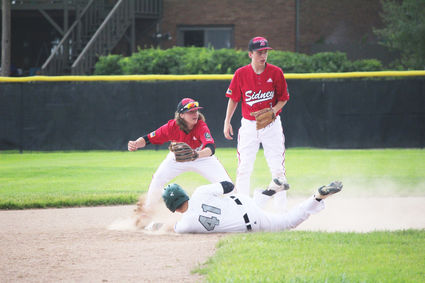 Sidney shortstop Grant Campbell tags Buckley's Braydon Lapp as he tried to steal second during Sidney's 9-to-8 victory against the Bombers last Tuesday.

Last Tuesday the American Legion Post 17 Junior baseball team hosted the Border League Buckley Bombers at Legion Field, and after falling behind early in the game the Juniors mounted a comeback to win the game 9-to-8.

Jaeden Dillehay started the game for the Juniors on the mound, and after two quick strikes on the leadoff batter, threw four pitches out of the strike zone to put a runner on first.

Dillehay was able to get the next two outs while the runner advanced to third, and got Buckley's Xander Speicher to hit a fly ball to left field, but Sidney left fielder Ethan Reichmann couldn't...