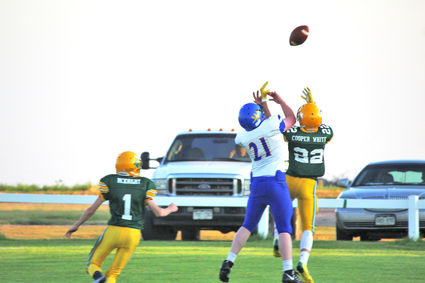 Senior Cooper White deflects and tips the ball to himself, then runs for a touchdown in the first quarter during the Bulldog's victory over Weldon Valley on Thursday.

Peetz's Bulldog Football Team started their 2019 season with a decisive 59-to-28 win against the visiting Weldon Valley Warriors Thursday evening.

Peetz jumped on the Warriors early, with sophomore Keegan McKnight blasting a long run right up the middle on the second play from scrimmage to put the Bulldogs on the scoreboard first. The Peetz defense did a great job of shutting down the outside run, forcing a turnover on downs on the Warriors first drive.

But Peetz fumbled as they drove deep into Warrior territory, giving Weldon Valley a spark of momentum, although short-lived. On the first play of the drive, Peetz senior Cooper White broke on a pass, then deflected it into his own hands and had no defender to stop him from an easy touchdown.

With a successful point after kick, they Bulldogs held a 14-to-0 lead. Peetz finished off the first quarter with a 20-to-0 lead, and the rout was on. 26 points against 14 points for Weldon Valley in the second quarter gave Peetz a comfortable 46-to-14 margin at the half, and they cruised to a 59-to-28 final score.

The Bulldogs committed to the running game, rushing the ball 27 times for 227 yards, while only attempting five passes and totaling 40 yards in the air.

McKnight and White provided a one-two punch for the Bulldogs, accounting for 221 of the Bulldog's 227 rushing yards. White led the defense with 14 total tackles, a sack, and an interception for a touchdown.

Peetz next hosts Otis on Friday.