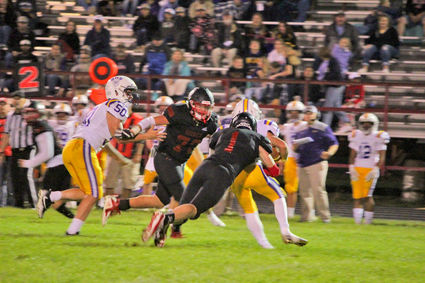 Senior Cooper White deflects and tips the ball to himself, then runs for a touchdown in the first quarter during the Bulldog's victory over Weldon Valley on Thursday.

Sidney's Red Raider Football Team opened its' 2019 season at home with a weather-delayed 14-to-13 victory over the visiting Bridgeport Bulldogs. After shutting out Bridegport 40-to-0 in last year's opener at Bridgeport, the Red Raiders had all they could handle against the upstart Bulldogs, and had to hang on to win a game they were expected to win handily.