50-plus Years and Done: Anthony Puts Away Agenda, Minutes 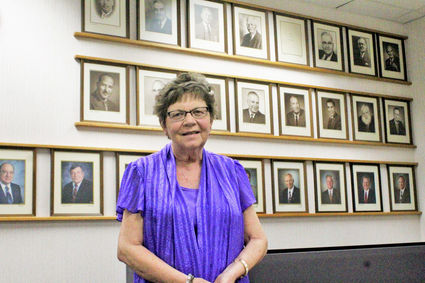 City of Sidney Clerk and Treasurer Geri Anthony will be retiring from the time clock, stepping down from her duties as clerk and treasurer. Deputy Clerk/Treasurer Cynthia Heilbrun will assume the duties of clerk and treasurer the same day as Anthony's resignation. Anthony is pictured with the photographs of the many mayors she has worked with over the years.

In 1965, she moved from Alliance to Sidney. The move was expected to be a career step. Get her training and Sidney Business Institute and move on to the next step.

That all changed when a short-term opportunity, you might say an internship or temporary position, turned into a lifelong occupation.

She announced her retirement effective Oct. 11 at the Aug. 27 city council meeting. She has served as the City Clerk and Treasurer since 1980-1981. She has more than 50 years of service dedicated to the city of Sidney.

Her length of service provides the unique perspective of being part of recent history, having served under several mayors, city councils and city managers. She started with the City as a deputy clerk, talking minutes for the council and several volunteer boards.

Soon after she was appointed as deputy clerk, the clerk left and she was promoted to clerk-treasurer. The duties of clerk and treasurer were a learning experience to say the least, according to Anthony. One of the challenges were the year-end reports. The former clerk and treasurer left the City shortly before the end of year reports were due.

"There were nights I was down (at the office) all hours, tears running down my face, but I made it," she said.

Other challenges involved watching the city go through changes: the loss of the Sioux Army Depot, the changes with the sale of Cabela's to Bass Pro with the resulting staff reductions are two examples she cited.

She said working for the City evolved into a second family with staff supporting each other through achievements and difficulties. Sitting at her desk with multiple projects needing her signature, she recalled her cancer diagnosis, and how the staff rallied around her. The diagnosis required surgery, removal of part of her left lung. It was also the longest time she spent away from her work.

"You wouldn't be able to do it if you didn't have support," she said.

It is the support of the staff, and the gratitude shown to her for her dedication, that has made her career with the City of Sidney more than half a century of accumulated time. She said the gratitude shown to her will always be the high moments of her time with the City. In addition to being locally commended, she is the two-time recipient of the Outstanding Clerk's Award for the State of Nebraska.

"Through it all I had two sons. It's a pretty good deal," she said.

They now have grandsons and a great-grandchild.

They are also a family with a thin line between business and recreation. They have a history of attending car shows, showing their own rolling works of art and passion.

"That's been a really big part of our lives away from here," she said.

With the clock ticking toward full-time retirement, the question of what next comes to mind. First on the agenda is a celebration trip, a trip to Cabo San Lucas. After they return, she is looking forward to she and her husband spending more time away from work.