Raiders Look for 3-0 Start Against Minden 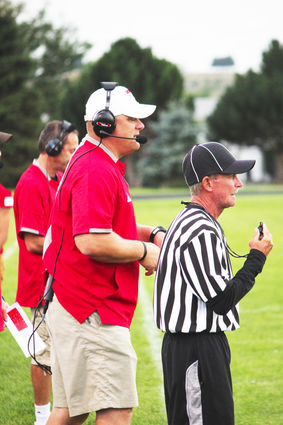 Sidney Head Coach Chris Koozer looks to bring his team to a 3-and-0 mark against the Minden Whippets on Friday.

Sidney's Red Raider Football Team defeated the Gordon-Rushville Mustangs 47-to-19 in Gordon Friday night to improve their season record to 2-and-0, and have a long trip on Friday to face the Minden Whippets next.

The Red Raiders did not have a fast start, giving up a 40 yard run and a touchdown to begin the game. Sidney was able to eventually get their rythm and answered the Mustang's first score to even the game 7-to-7 at the end of the first quarter.

Sidney got on track in the second quarter, putting up 14 unanswered points to go into the half ahead 21-to-7. Sidney put up another 26 po...