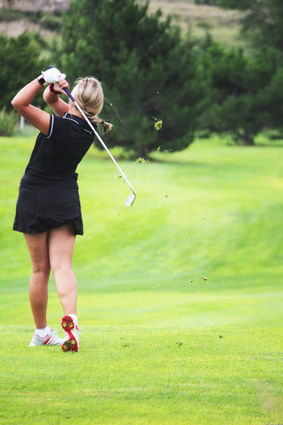 Senior Amanda Beier hits a solid tee shot on the first hole during the Sidney Invite on August 27.

Sidney's Lady Raider Golf Team started its 2019 schedule by hosting the Sidney Open on August 27th, and the dominant Gering and Scottsbluff teams fought it out in perfect weather conditions until Gering was able to take top team honors by five points over Scottsbluff. The Sidney squad finished fourth with a score of 410, and was led by senior Amada Beier's round of 100, followed by junior Ashlee Ringleman's round of 103.

Sidney traveled on September third to compete in the Scottsbluff Invite, and placed fourth as a team, while Scottsbluff edged Gering for top honors. Ashlee Rigleman lead th...