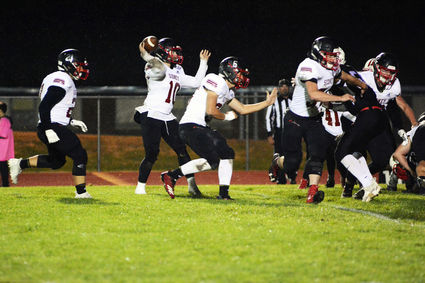 Sidney senior Eli Ahrens attempts a pass during the Red Raiders' 24-to-9 loss against the Chadron Cardinals Friday night at Chadron High School.

Sidney's Red Raider Football team dropped its' third contest in a row, falling to the Chadron Cardinals 24-to-9 in a soggy slog of a game that had Sidney struggling for offense throughout the contest. The Red Raiders fall to 2-and-3 on the season, and it doesn't get easier as the powerhouse Scottsbluff Bearcats visit Weymouth Field Friday night looking to remain undefeated at Sidney's expense.

Sidney started strong with their defense forcing a three-and-out on Chadron's first possession, but the Raiders were unable to move the ball offensively. Both teams struggled for offensive momentum, w...