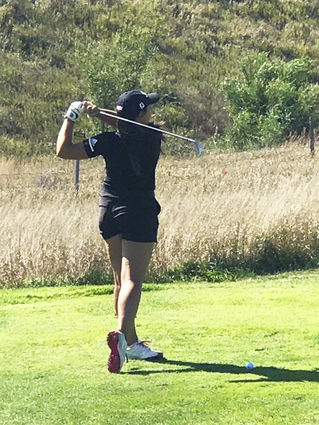 Kimball's Payton Wise tees off during recent action. Wise's excellent season was highlighted by shooting a school-record round of 77 at the Gering Invitational.

It certainly was a "Wise" season for the Kimball High girls golf team and it mostly centered around sophomore Payton Wise, who once again ended her season with a state appearance – and a state medal winning appearance.

Payton brought home nine individual medals this season, including winning first place medalist honors at five tournaments. She started the season with a ninth place at Sidney, then won at Bayard with a new school record round of 81.

She followed that up with a win at the Kimball/Western Trails Tournament, shooting 87 to boost Kimball to a team win with a round of 421. All...