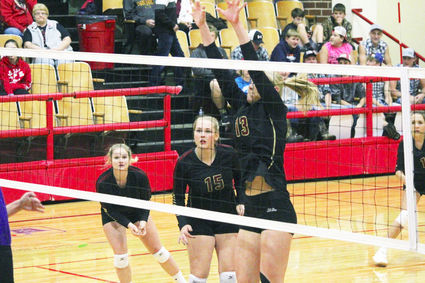 Leyton's Lady Warriors had many challenges this year, fighting for consistency while hovering around the .500 mark for the season. Last Tuesday after getting past a stubborn Minatare team in the semi-finals of the D2-12 Subdistrict Tournament, the Lady Warriors faced off against the powerhouse Garden County Lady Eagles, a team that had lost only one match the entire season.

Leyton had dropped seven straight sets to Garden County during the season, but battled hard in the first set. Tied at 7-to-7, Garden County finally started to string together points and pull away from the Lady Warriors, ending the first set 25-to-14 and looking to put Leyton away in straight sets. Leyton played much better in the second set, with their defense covering holes and their setters putting up better offerings for standout senior Madelyn Watchorn and sophomore Cortney Holt to make big kills. Leyton opened a 16-to-13 lead and kept the pressure on, but the Lady Eagles fought back to tie the set at 22 and then at 24. But a Garden

County serving error followed by a big kill by Watchorn gave the Lady Warriors the set, 26-to-24, and the battle was on.

Leyton opened the third set with a 7-to-0 run, and never let up powered by kills by Watchorn and Holt, while junior Ella Draper went on service runs and put away the Lady Eagles 25-to-23 after a late rally by the Garden County squad. Leyton again came out hot in the fourth set, but Garden County caught up and took a big lead. The Lady Warriors fought back to

The fifth set started with the teams trading scores until they were tied at 6-to-6. But then Garden County showed why they only lost one match during the season, and started to pull away while Leyton started to make errors. After scoring six, the Lady Warriors were only able to manage one more point and dropped the final set 15-to-7 for the 3-to-2 match loss. The loss ended the season, but the Leyton squad showed heart and head coach Jodi Craig saw the positives in the loss.

"My girls definitely showed up to play today", said Craig, adding, "Our goal was to be at our best at sub-district time, and we proved we were.

Craig went on to comment on the year they had, saying, "I am very proud of this group and how they came together throughout the season and developed as a team. Watchorn was a major force for us, tallying 1000 kills for her career and providing leadership for the team. Cortney Holt really stepped up her hitting game with 171 kills this season, and Sage Rummel put together a stellar defensive season as our libero, strumming up 614 digs on the year. I look forward to working with our returning players and getting even better next year."

The Lady Warriors finished their season with a 17-and-16 record, and a runner-up showing in the D2-12 Subdistrict tournament.