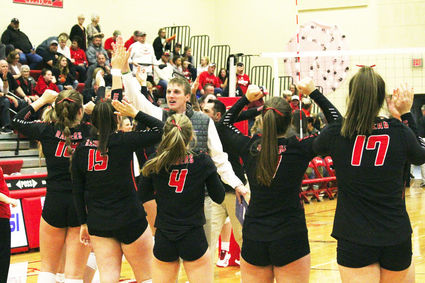 Sidney Head Coach Marcus Ehrke congratulates his team after winning the Class B District Title against Beatrice on November 7. The Lady Raiders ended their season with a 32-4 mark, the best in the program's history.

Sidney's Lady Raider Volleyball team fell short in their quest for a State Title, but had an outstanding year and are well-positioned to continue their success into the future, according to first year head coach Marcus Ehrke.

Ehrke finished his inaugural season with the Lady Raiders with a 32-and-4 record, and a Class B District Championship.

Ehrke commented on the team's year, saying, "Our season as a whole was a huge success. A school record for wins, and senior Mattie Johnson broke the Sidney records for most kills in a single match and a single season while also establishing a new car...