A Look Back at the Fall Sports Season 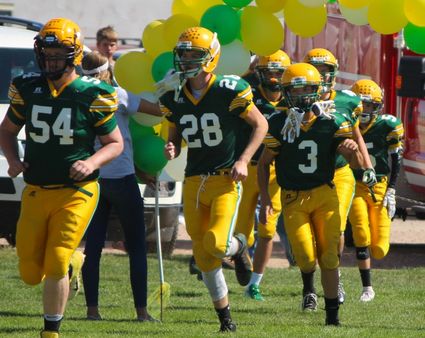 The 2019 Fall Sports Season has wrapped up here in Cheyenne County and the surrounding communities, and with a few exceptions, most of the area's teams did not live up to their expectations, though certainly not for a lack of effort.

Some teams could not perform at last year's level due to key players graduating, while some continued to struggle and looked for the positives in their losses. A few seemed to have all the key elements in place, but just could not get them all to work together at the same time.

Here are the highlights of the Fall 2019 season:

The Storm broke through last year with three wins, the most in their relatively short history, and followed that season up with an 8-and-0 2019 regular season campaign, and two playoff wins. They fell short in the D-6 State Tournament semi-finals, finishing with a record of 10-and-1 while bringing the Chappell and Lodgepole community football worth watching.

Most years, a team with a new head coach having the school's best season record ever and making it to the State Tournament would be in the top spot, but Creek Valley's two playoff victories made them the first choice.

Our area is blessed with many talented young athletes, but senior Patrick Hansen stood out as the spark that ignited the Storm's historic season. With 32 passing touchdowns, 18 rushing touchdowns and 148 total tackles, Hansen's production will be missed next season.

The Peetz senior was a bright spot in an otherwise down year for the Bulldogs, rushing for 1283 yards and 15 touchdowns, passing for 388 yards and 7 touchdowns, while compiling 72 total tackles in the season.

The multi-sport standout senior had 448 kills, 55 ace serves, 33 blocks, and 404 digs while leading the Lady Warriors to a 17-and-16 record. She also joined the "3K Club", with over 1000 kills, digs, and service receptions in her high school career.

Johnson had a fantastic senior campaign with 494 kills, 73 ace serves, 23 blocks and 473 digs, though Watchorn gets the nod for playing in three less matches on a less talented team.

All of the hard work and perseverance Joe Kupper and his staff invested into the Creek Valley football program paid off with a historic 10-and-1 season. Kupper did a great job keeping his squad focused and prepared for every game while managing injuries and having well-prepared players fill in for starters when necessary.

Head Coach Marcus Ehrke moved his family to Sidney over the summer and with the help of his assistants immediately dove into the Sidney Volleyball program, creating a great rapport with his team and earning Sidney's best ever season record while earning a trip the the State Championships.

The sophomore placed in the top 10 in every race except one this season, and finished strong with a sixth place showing at the NSAA Class C State Championships to end his sophomore campaign.

The freshman standout quarterback passed for 763 yards and 11 touchdowns while rushing for 395 yards and three touchdowns in his first year for the Coyotes.

The junior had a breakout season with blistering serves, strong net play and devastating kill shots for the Lady Raiders. Look for the athletic Holly to anchor the team in her senior campaign next season.

Ringleman consistently shaved strokes off of her score throughout the season and looks to take over the number one spot for the Lady Raiders linksters next season.

The Lady Warriors faced off against the 29-and-1 Lady Eagles, a team they had dropped seven straight sets to during the regular season, in the finals of the D2-12 Subdistrict Tournament. After dropping the first set, the Leyton squad took the next set and eventually forced a fifth and deciding set for the championship. The Garden County squad held on to win, but the the Lady Warrior's battle against the the dominating Lady Eagles was the type of loss that can inspire teams to new heights.

With dangerous lightning delaying the kickoff of Sidney's season opener, this game was destined to not play out according to type.

Sidney dominated the Bulldogs 40-to-0 last year, and started the game fast with a 57 yard touchdown pass. But the Bulldogs responded and played tough, and a missed extra point proved to be the difference as the Sidney defense came up with big plays to stop the Bulldogs in the final seconds of the game, and the Red Raiders escaped with the 14-to-13 victory.

The Bulldogs have a classic green-and-gold combination that evoke images of the Green Bay Packers while having enough differences to not be a blatant copy of the NFL team's look. Both home and away uniforms are impressive.

Runner Up: The Potter-Dix Coyotes red-and-gray combination with white piping coupled with the Coyote logo on their helmets are distinctive and smart.

Needs To Go: Sidney's black-on-black uniforms with maroon lettering and numbers are trendy but not very distinctive. The maroon lettering is to honor the original Sidney Maroons moniker of old, but they're too difficult to see during night games. Remember, you're the Red Raiders, fellas.

The classic "Potter-Dix" lettering and interesting combinations always look good for the Lady Coyotes. All of their combinations look clean and distinctive. Their special pink and black uniforms were impressive.

Runner Up: The Leyton Burgundy and Gold and its variations always look distinctive and sharp while avoiding that monochromatic look that's far too common today.