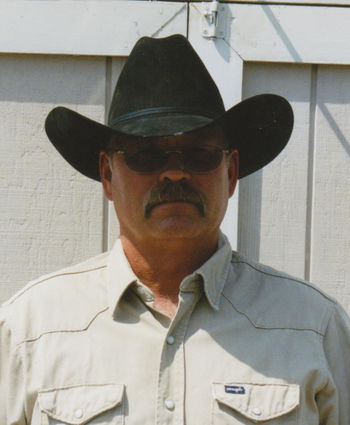 Graveside services will be held at 2:00 P.M. CST., Friday, December 13th in the Douglas Grove Cemetery west of Comstock, NE with Pastor Don Schauda of the Wescott Baptist Church officiating.

Viewing will be on Thursday from 1-7:00 P.M. at the Gehrig-Stitt Chapel. Memorial contributions may be made in care of the family for a college fund set up for his grandkids Kyle and Alexis. You may view Ronald's Book of Memories, leave condolences, photos and stories at http://www.gehrigstittchapel.com.

Ronald L. Lenstrom was born in Loup City, NE on December 26, 1951. He lived in rural Comstock, NE as a child and young adult. He attended K-7th grade in Ord and 8-12th and graduated from Ord High School. He played and developed a love for football. He became a lifelong lover of our Nebraska Cornhuskers and was in front of the TV every weekend when they played. He was an Ord Police Cadet during his high school years. After graduation, he was hired as a fingerprint technician for the FBI in Washington D.C. While living in D.C., he became a police officer and served until he was drafted into the Army. He was stationed and had basic training at Fort Lee, VA. He was transferred across country to Fort Lewis, WA, south of Seattle. While stationed in Fort Lewis, he was assigned to the Fort Lewis Soldier's Chorus. In the chorus, he performed at numerous area events, sang, and learned to play the bagpipes. While at Fort Lewis, he was sent to Germany and from there was honorably discharged from the Army on June 20, 1973. After his discharge, he returned to Comstock to help his parents with farming and ranching at the Lenstrom Valley View Farms.

He had a true love for farming and ranching. During those times, he was very active and involved with the Comstock Community and surrounding areas. He was a lifetime member of local Comstock American Legion Post 220. He was Post Commander in 1979 and was a member of the Comstock Fire Department and Leader of the horse department of the local Wranglers 4-H Club. He broke and trained many area horses. His favorite sorrel horse, Big Red, and helper cattle dog, Pearl, were always by his side. He also worked part time for the Nebraska Brand Committee at the Sargent Sale Barn. In 1983, he was hired full time to the Nebraska Brand Committee as a Brand Inspector until he retired 33+ years later. During these years, he worked as a manager of the Kearney area until transferring to the panhandle. While living in Sidney, he inspected and worked cattle in Cheyenne, Kimball and southern Banner County. He also helped inspect cattle at the sale barn in Ogallala.

During his life in Sidney, he had a love for motorcycles and owned many different type of bikes until his health caused him to sell his beloved bike. The love for his motorcycle was spent riding with the local bikers and traveling to many different areas on two wheels. He was a member of the Patriot Riders and participated in many activities with them. While living in Sidney, he was a Reserve Deputy to the Cheyenne County Sherriff's Department as security for Oktoberfest and other events under Sherriff's Darrell Johnson and John Jensen.

During his time in Washington D.C., he met and married Kathy Jo Kinkade on April 17, 1971. While stationed at Fort Lewis, WA, his son, Cory Lenstrom was born on July 25, 1972. After graduation, Cory followed in his father's footsteps into the Military by becoming a Navy Hospital Corpsman assigned to a U.S. Marine Corps unit and he traveled around the world with them for 10 years. Cory then moved to Sidney and is currently a City Police Officer for the City of Sidney and was a Deputy for the Cheyenne County Sheriff's Office. He is serving this community as his father has served his many communities over the years.

On July 11, 1975, his second child, a daughter, Carrie Lemke of Superior, NE was born in the Ord hospital while the family lived in Comstock. Carrie has also followed in her father's footsteps into Emergency Medical Services and serving her community. She works for the City of Superior as an EMT and is the captain of Superior Volunteer Rescue Squad. She is a current member of the Superior City Council serving them for several years. She helps the Superior Police Department as needed throughout the day as their secretary. Ron's sense of service to his communities and to others has been passed down to both his children.

Ron was preceded in death by his father Gayle Lenstrom and his grandparents Conrad & Ruth Lenstrom and William & Gladys Reckling.