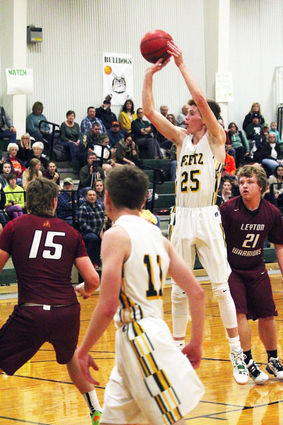 Peetz junior Nolan Hill goes up for two during the Bulldog's victory over Leyton on Thursday.

Opening the Carlisle Classic with a resounding 69-to-39 victory against Otis, the Bulldogs followed up the next day with a nail-biting 53-to-52 victory over against Prairie. Peetz then had two more big wins against Lone Star and Leyton to open the season with a 4-and-0 record.

Head Coach Sean Fehringer's squad looks to already be in mid-season form, playing aggressive and effective defense while effectively passing the ball to set up good looks for the offense.

Peetz opened up fast against Lone Star, with senior Cooper White directing the offense a dishing the ball effectively to Nolan Hill...