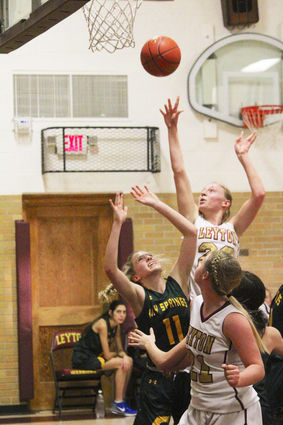 Leyton senior Madelyn Watchorn goes up high for a jump shot during the Lady Warrior's victory over Hay Springs on Saturday.

Leyton's Lady Warrior basketball team shook off a heartbreaking 44-to-43 loss at Arthur County in the beginning of the new year and illness limiting a number of their players by winning two games in a row at home in Dalton.

On January 7, the Lady Warriors bounded out to a 18-to-7 lead at the end of the first quarter against the Haxtun Lady Bulldogs, and looked to be in control of the game. But the Haxtun defense sharpened, and the visitors closed the gap as the game wound down. Ultimately the Haxtun comeback was not enough as the Lady Bulldogs could not stop Leyton senior Madelyn Watchorn, and the Lady Warriors avoided a second heartbreaker in a row and held on for a 54-to-52 victory. Watchorn led all scorers with 33 points, including her 1000th point of her career. Junior Ella Draper had nine points, six rebounds and five steals in the win.

On Saturday the Lady Warriors hosted the Hay Springs Lady Hawks, and the winless Lady Hawks gave up a surprisingly good fight, trailing by only one at the end of the first quarter. Hay Springs did a great job of constantly covering Watchorn, limiting her effectiveness until Leyton was finally able to put a few score together at the end of the half.

After Draper's three point attempt at the buzzer was blocked, Leyton went into the intermission up 24-to-20. After Leyton opened the second half with a 5-to-1 run, Hay Springs struck back with a three pointer to close to within 29-to-24. But Watchorn started to get under the hoop, and led a Leyton scoring run that ended with the Lady Warriors up eight at the end of the third, 36-to-28. The Lady Hawks were able to cut the lead to four in the beginning of the fourth quarter, but never got any closer as Leyton's offense proved to be too much, and the Lady Warriors steadily pulled away and ended the game with a 50-to-40 victory. Watchorn had 17 points, and Watchorn, Draper and senior Megan Ernest each had 10 rebounds in the victory.

Leyton head coach Jed Benish said after the Hay Springs game, "I was proud of our girls today. We had to work through a bunch of adversity. Hay Springs played a great game and shot the ball extremely well. We didn't shoot well and the score reflected it. We did do a bunch of nice things though, like only having seven turnovers and grabbing 35 rebounds. Hay Springs packed it in on Maddy (Watchorn) and some other girls stepped up nicely. It was a good team win."

Leyton's record improved to 6-and-3, while Hay Springs fell to 0-and-8 on the year.