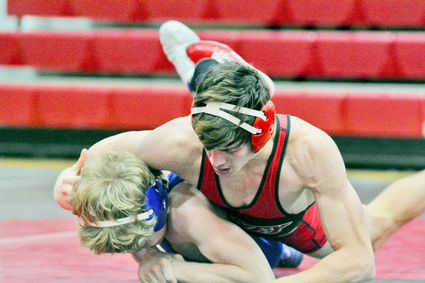 Sidney's Paul Houser controls his opponent in the 138 lb class at the Gothenburg Duals Tournament on Saturday.

Sidney's Red Raider Wrestling team hosted the Bridgeport Bulldogs for a dual meet on Thursday, and the two evenly matched teams went to the final bout before Sidney finally notched the win against the Bulldogs, 40-to-30. Both teams needed to adjust to injuries and illness, with Bridgeport forfeiting three bouts, Sidney one bout, and a double-forfeit in the 160 pound bout.

The Red Raiders then traveled on Saturday to the Gothenburg Duals Tournament and placed fourth out of eight teams competing. Sidney bested Holdrege 39-to-33 and Broken Bow 38-to-29 while falling to Adams Central 46-to-33, Gering 39-to-30 and Northwest 45-to-30. Sidney junior Brady Robb earned his 100th win of his high school career by pinning Northwest's Brody Sheeks in 30 seconds in the 170 lbs match.

The Red Raiders next travel to Lexington for the John Higgins Invitational on Saturday.