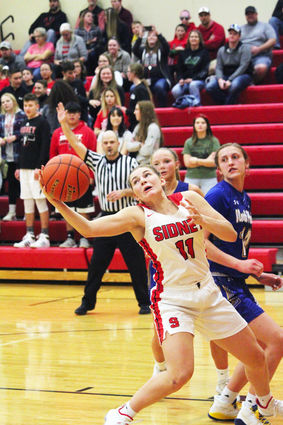 Sidney's Lady Raider Basketball team had a busy week, hosting the Mitchell Lady Tigers on Tuesday, Jan. 14th then traveling to Ogallala on Friday to face off against the undefeated C-1 Lady Indians. The Lady Raiders then had to turn around and host a tough Class A opponent in North Platte Saturday afternoon in Sidney.

Sidney started the week by hosting Mitchell, a team they had thoroughly beaten in their first game of the season at the Western Conference Tournament. Sidney pulled out to an 8-to-4 lead in a low scoring first quarter with both teams not getting many second chance shots off of rebounds.

Sidney then turned up the pressure on defense, smothering the Lady Tigers' offense and shutting them out in the second quarter while building a 20-to-4 halftime lead. Sidney played the second half patiently passing the ball trying to find the open shot while Mitchell played solid defense, creating turnovers and slowing the Sidney scoring. But the Lady Raiders defense never let up and the offense eventually wore down the Lady Tigers, and Sidney pulled away to a comfortable 49-to-20 victory, their ninth in a row. Seniors Mattie Johnson, MJ Johnstone, and junior Karly Sylvester each had 10 points in the win.

Traveling to Ogallala to face the undefeated Lady Indians, Sidney head coach Tyler Shaw said prior to the game that the Lady Raiders needed to focus on protecting the ball and to continuously attack on offense.

After a slow start, Ogallala pulled out to an 8-to-3 lead when Sidney fought back to go up 9-to-8 and never trailed again in the contest. Mattie Johnson powered the offense in the second half of the first quarter while the Sidney defense slowed the Lady Indians' offense.

In the second quarter, Sidney went on an offensive run and opened a 28-to-13 lead with 3 minutes left in the half. Ogallala was able to fight back in the closing moments of the period, and Sidney went into the intermission leading 31-to-20.

The second half continued in a similar fashion, with Sidney continuing to score while Ogallala fell further behind. After opening a 19 point lead at the end of the third period, Sidney was able to freely substitute and coast to a 59-to-40 win. Johnson led the Sidney scorers with 14 points in a victory that was probably Sidney's best all around game of the season.

On Saturday the Lady Raiders hosted the Class A North Platte Lady Bulldogs, and quickly found themselves in a fight against a tall athletic team filled with scorers.

After falling behind early, Sidney battled back in the first quarter with Johnson and Sylvester getting inside points and playing solid defense. Sidney was up 14-to-13 at the end of the first period, then North Platte went on a 15-to-2 run, and ended the half leading Sidney 31-to-20.

The low scoring quarter ended with North Platte leading 34-to-25, and it looked as if the grueling week was starting to take its toll on the Lady Raiders. In the fourth quarter, North Platte again slowed the pace down, and Sidney was able to generate opportunities to score, but kept failing to convert.

Sidney's record moves to 11-and-4 on the season, and they host the Yuma, Colo., Lady Indians at Sidney High School on Saturday.