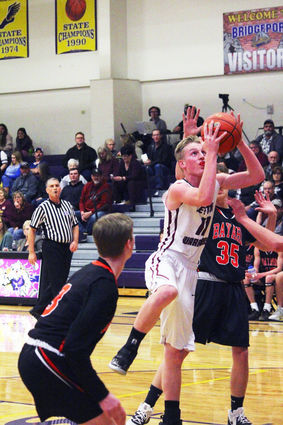 Leyton sophomore KJ Bush drives the lane during the Warrior's loss to the Bayard Tigers in the semi-finals of the MAC Tournament.

After the Leyton offense fired up in the second and third quarters to propel the Warriors to an easy 49-to-26 win over Minatare in the first round of the MAC Tournament on Jan. 20, the Warriors knew they would be facing a much tougher semi-final opponent in the Bayard Tigers. Leyton already lost to Bayard by 24 points in the beginning of the season, minimizing the importance of the teams' nearly identical records coming into the contest.

On Thursday the teams met at Bridgeport High School, and the Tigers immediately turned up the defensive pressure on the Warriors. Turnovers have plagued t...