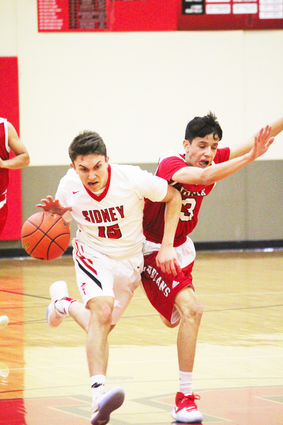 Sidney senior Skylar Heineman battles for control of the ball during a fast break in Sidney's loss to Yuma on Saturday.

Last year, the Red Raiders struggled during the first half of a disappointing season, but were able to beat the undefeated Yuma Indians on the road to provide a spark and a highlight to a down year. This year, the Indians traveled to Sidney and the Red Raiders were hoping that they could again upset the favored Yuma team to stop a seven game losing skid. With senior Arik Doty sidelined by injury, Sidney Head Coach Austin Lewis knew he'd need an outstanding effort on both offense and defense if the Red Raiders were going to knock off the 9-and-1 Indians.