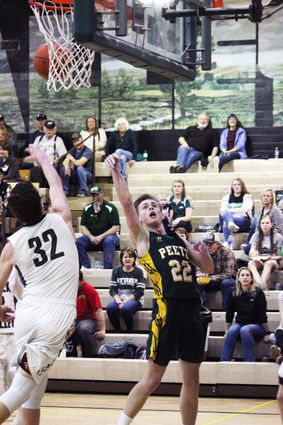 Peetz senior Cooper White tries for two from the outside during the Bulldogs' 72-56 victory over Creek Valley on Saturday.

Peetz's Bulldog Basketball team traveled up to Chappell, NE, to face the Creek Valley Storm in a late Saturday afternoon match up.

The 7-and-8 Bulldogs looked to even their season record against a struggling 3-and-13 Storm squad, and focused on shutting down Creek Valley's two most effective weapons, junior Oakley Hodges and senior Patrick Hansen. Both teams started slowly on offense until the pace picked up midway through the first period and Peetz got into a rhythm.

In the closing moments of the first period Creek Valley junior Justin Ningen hit a three pointer only to be answered by Peetz senior Cooper White's three point shot to make the score 17-to-13 in Peetz's favor going into the second period. Peetz continued the strong defense in the second period, clamping down on Hansen and Hodges and opening a 16 point halftime lead, 36-to-20.

The Bulldogs speedy offense kept scoring and drawing fouls, and the Bulldogs started to pull away as the third period progressed.

With three minutes left, Hodges fouled out and then at the end of the period 6'4" sophomore Drew Fraas also fouled out, and Peetz junior Nolan Hill took advantage of Creek Valley's lack of height and started to pile up the points. Although Creek Valley continued to press, led by the fourth quarter hustle of sophomore Landon Mahon, the deficit was too much to overcome and the visitors came away with a 72-to-56 victory. Hill led all scorers with 21 points, including 19 in the second half.

Cooper White also had 16 points for the Bulldogs in the victory, while Peetz held Hansen and Hodges to just five and four points respectively. Mahon led the Storm with 18 points in the loss.