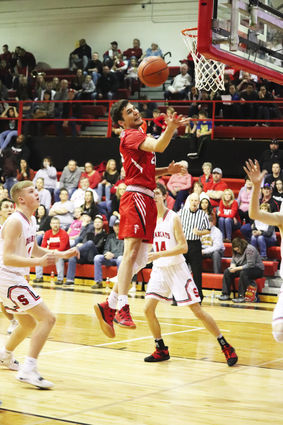 Sidney junior Dylan Gunkel goes up high for a rebound during the Red Raiders' 82-38 loss to Scottsbluff on Saturday.

On Friday, Sidney traveled to Gering to face the Bulldogs for the third time this season, hoping to finally get the best of their rival. After falling by 33 points in their last meeting, the Raiders' offense was able to handle the Bulldogs' defense and led by a 12-to-11 score at the end of the first period.

Gering started to get their offensive rhythm in gear, outscoring the Sidney squad in the second period on their way to a 28-to-23 halftime lead.