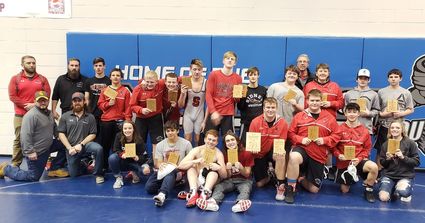 Sidney's Red Raider Wrestling team had another busy week, starting with a trip up to Gering for a dual with the Bulldogs last Thursday. After the teams battled together, swapping leads and momentum, Sidney finally pulled out the win on the strength of Dietrich Lecher's pin in the final match to take the dual 36-to-33.

On Saturday, the Raiders traveled to Yoder, Wyo., for the Southeast Duals and were on there game, dominating the completion. Seven Red Raiders went unbeaten in the tournament which had Sidney defeat Chadron 60-to-23 in the semifinals before the Red Raiders took the championshi...