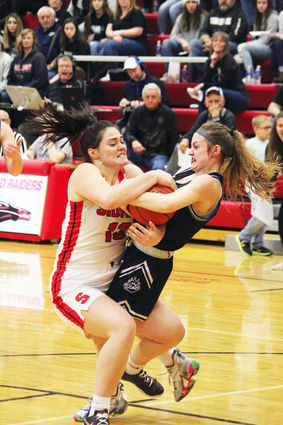 Sidney senior Kendra Nesbitt wrestles the ball away from Blair sophomore Mya Larson in Saturday's 34-to-28 victory in the District Finals. The Lady Raiders move on to the NSAA State Tournament in Omaha.

After avenging a two-point overtime loss in the beginning of the season with an 11-point victory at home on February 8, the Lady Raiders were matched up against the scrappy Lady Bearcats in the subdistrict final for the second year in a row.

Sidney again started the game slowly, with the visitors jumping out to a quick 5-to-0 lead before the Lady Raiders got their offense on track and started to score. Sidney surged past Scottsbluff during the middle of the period, but a few tim...