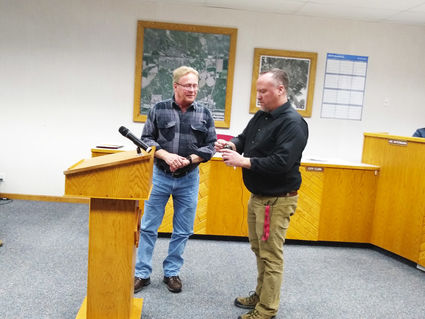 Sidney Mayor Roger Gallaway, right, presents retiring City Manager Ed Sadler a pocket watch in recognition of his service to the city. Sadler attended his last Sidney City Council meeting as city manager on Feb. 25. He and his wife plan to move to the east coast at the completion of this school year.

About four years ago, Ed Sadler walked into Sidney City Hall with a task. Simply put, he was directed to keep the city moving forward through one of the toughest periods in recent time.

On Tuesday, Feb. 25, he attended his last Sidney Council meeting as city manager.

"I've been here four years now," Sadler said near the end of the meeting. "We've done some great things."

Sadler announced in October he would be retiring in February/March, at the completion of his four years as city manager. In October, he said he knew Sidney would be his last job.