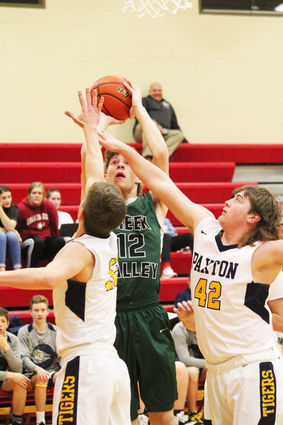 Creek Valley freshman Hunter Martinez puts up a jump shot during the Storm's loss to Paxton in the D1-12 finals. Creek Valley will reload with a talented group of underclassmen returning for the 2020-21 campaign.

Creek Valley's Storm Basketball team was able to outlast Minatare last week to advance to the Subdistrict D1-12 finals, but faced a tall and athletic Paxton team that had already defeated them by over 20 points earlier in the season. The 18-and-3 Tigers made short work of the Storm, blasting off on a 16-to-0 run to open the game on their way to a 22-to-6 score by the end of the first quarter. The Storm's Patrick Hansen and Justin Ningen tried to use their speed to find openings in the defense while Oakley Hodges attempted outside shots, but the big and fast Tigers kept rolling and held a 40...