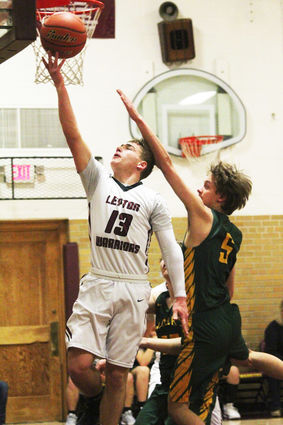 Leyton junior Dominick Russ scores two points during recent action for the Warriors. Russ returns next year as a scoring leader and anchor for the Warrior's offense.

Leyton's Warrior Basketball team was matched against the South Platte Blue Knights in the semi-finals of the D2-11 Subdistrict tournament in Ogallala on February 26.

Leyton lost by 13 at South Platte early in the season, but the team's fortunes had changed through the season, with South Platte notching just six wins while Leyton improved throughout the campaign and won nine games.

The teams were evenly matched and Leyton led by two after a low-scoring first quarter. Both teams kept pace throughout the second quarter, and at the half Leyton had built a four point lead, 22-to-18.