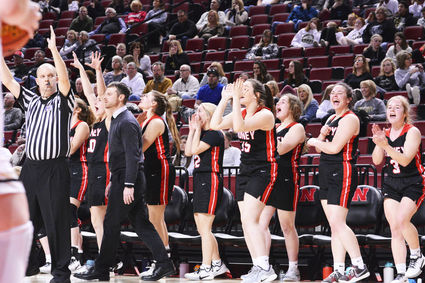 The Sidney bench reacts to Nicole Birner's three point shot during the fourth quarter of the Lady Raider's quarter-final game against Northwest at the NSAA State Championships on Thursday.

Sidney's Lady Raider Basketball team lost to the Northwest Lady Vikings 47-to-44 in the quarterfinal round of the NSAA Class B Girl's State Championship Tournament Thursday morning.

The fourth seeded Northwest team rallied from a six point deficit at halftime to defeat the Lady Raiders and moved on to the semi-final round against number one seeded Crete on Friday, while the Lady Raiders' defeat ended their season with a 19-and-7 record.

Sidney faced a big challenge going into the game against the 21-and-5 Northwest team that was battle tested by playing a difficult schedule peppered with C...