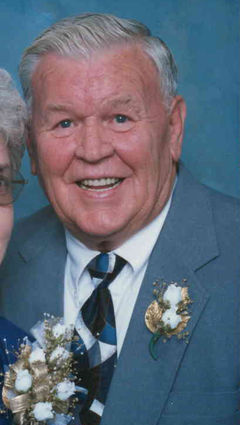 Duane was born January 2, 1930 in Sidney, NE to Lawrence and Florence (Shaw) Tobler. He grew up in Dix, NE and played high school football on the six-man team, there. He graduated from Dix High School in 1947.

After graduation, he married Mildred (Jacobs) on August 14, 1947 in Kimball, NE. They were married for more than 72 years.

Duane taught Sunday school at the Dix Presbyterian Church and was a Deacon. He was proud to be a member of the Fraternal Order of Masons and went on to become a Shriner.

Duane retired from the Union Pacific Railroad and he and Mildred moved to Las Vegas, NV in 1987. Duane loved playing live poker and betting on sporting events and horse races.

Duane passed away, peacefully at home, with the love of his life by his side.

Duane was preceded in death by his parents, two sisters, Noreen and Dorothy, and his brother Dale. He is survived by his wife Mildred, his four children, Dennis (Cindi) Tobler, David Tobler, Jan (Mike) Kepler, Julie Blackman-Crow, five grandchildren, and four great-grandchildren.