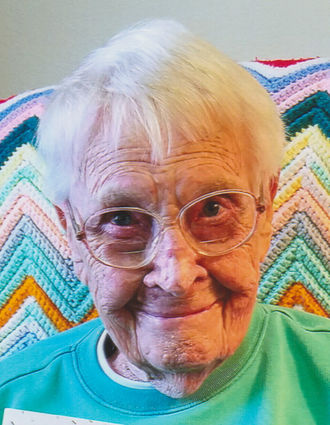 Cremation has taken place. A family inurnment will take place at Greenwood Cemetery on June 20th, 2020. Memorial contributions may be made in Ada’s name to the Light Memorial Presbyterian Church.

Ada Margaret Sharman, the daughter of Gustav John and Minnie (Feldman) Hennig, was born on October 30, 1916 at the home of an Uncle east of Gurley, NE. The family later moved to a farmstead further east and Ada attended Grade School at District #6. She graduated from Lisco High School, prior to attending one year at Chadron State College. On December 22, 1940, Ada was united in marriage to Earl Arthur Sharman at Imperial, NE. They lived in Sidney until 1952 when they moved to Ogallala for thirty-one years before moving back to Sidney in 1983.

Ada was a loving caregiver of her children and husband. She found working with the church thrift shop in Ogallala and congregate meals in Sidney very rewarding. She was a member of the Light Memorial Presbyterian Church for more than fifty years. Ada was a true Nebraska resident having lived all her life in Nebraska. She enjoyed baking, caring for her roses, crocheting and knitting afghans for her family to enjoy. Ada was a valued blood donor for most of her life.