Lending a Hand to the Plow 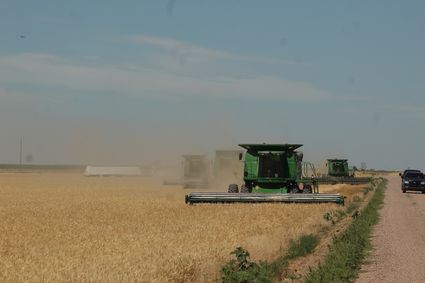 There were tears, smiles, laughter and quiet memories as local farmers gathered for one last chance to return a favor to one known to give to anyone who had a need.

Life seldom ends on a schedule. Too often family get that phone call no parent wants to answer. From that point, life changes. The son or daughter is no longer walking among the living. Conversations become like retrieving memories from a shelf.

In the course of moving forward, there comes addressing the details of when everyone believed life would move on. On Saturday, the Gipfert family learned how blessed they are when friends of their son Josh loaded the trucks and harvesters, grabbed the work gloves and prepared for a morning of doing what Josh has done countless times, and what he can no longer do for himself.

As the workers and supporters of the family gathered, Tyson Narjes, one of the organizers of the volunteer harvesters, described the effort as the least they could do, take a break from their won harvesting to help bring in Josh's last crop.

“I think everybody was in shock when he passed,” his mother, Nancy Gipfert says.

She describes Josh as a hard-working man, and the most kind-hearted man a person would ever meet.

His kindness and work ethic committed him to helping friends and neighbors regardless what was on his priority list.

“Josh was the kind to drop everything and help others,” she said.

He worked at 21st Century John Deere until he married and started a family. Then he started farming. He didn't grow up around farming as might be expected, except for the number of friends who influenced him from his youth to adulthood. The rural work ethic developed within him, as did the value of a person's neighbors and friends.

“He was always busy, from sunup to sundown,” Nancy said.

Probably the only priority above his friends and fellow farmers and ranchers was his family, his daughter specifically.

“His daughter came first,” she said.

“They are all fellow farmers that Josh has hung around with,” his mother said.

She said most of them are buddies he grew up with. They grew up being a support system for each other. When one needs help, a repair job or racing a storm in harvesting the fields, the others responded. Saturday was a chance for Josh's support network to return the favor.

His mother Nancy wants to thank every involved for making this stage in the process a little easier.

One of his fields was adjacent to Keith Rexroth's property; no coincidence since he spent so much time at the Rexroth farm.

“This year would have been 20 years helping me,” Keith Rexroth said Saturday.

He said Josh started helping Rexroth when he was a sophomore in high school. Some of the property he leased to grow wheat belonged to Josh's great-great-grandfather.

Tyson Narjes described Josh as his best friend. He said they spent so much time together it was like having another brother.

“He helped us at times, We helped him,” Narjes said.

Dan McMartin describes Josh as someone he connected with immediately.

“Something about him, when we first met, we became fast friends,” McMartin said.

He added Josh is how McMartin became a member of the Gurley Volunteer Fire Department.

“Josh was loved by many,” she said. “Josh would drop anything and everything to help. This is their way to return the favor.” 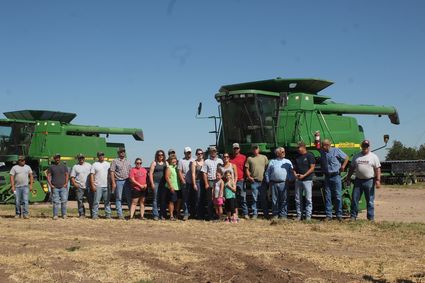 She said when you live in a small community, you see how close your friends are.

The harvest took about two hours with three and four combines lined up at each field. Following the work, family and friends gathered for lunch at the Rexroth farm, a gathering where memories were overwhelmed with the blessing of support by the farming community.

The day in the field included friends, family and people who heard about the undertaking; strangers in one sense but connected by the bond of the agricultural community and small town life. The memories of Josh Gipfert's life will go on. For the family, the memory is also of how the ag community returned the blessing he so quickly gave.