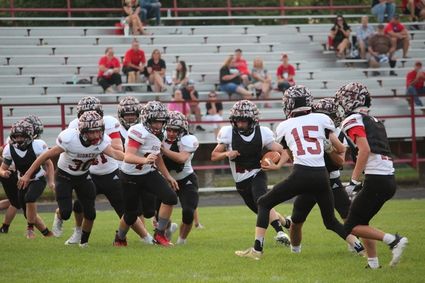 Last season, the Sidney Red Raider Football team opened their season against the Bridgeport Bulldogs at home in a game that featured a lightning delay that had the fans scrambling for cover inside Sidney High School, and the Raiders coming away with a win decided by a missed point after attempt.

Sidney Head Coach Chris Koozer expects this year’s opener against the visiting Bulldogs to be even tougher, as Bridgeport returns 14 seniors on a team that had their first winning record in four seasons.

Sidney will start 6’0” sophomore Nolan Hofrock at quarterback against Bridgeport.

“He (Hofrock) has a good arm and can make all the right reads”, said Koozer about the sophomore play caller.

The Red Raiders will rely on a ground game featuring senior Brady Robb and junior Nathan Kennedy, and return a total of 11 seniors for the season.

Koozer expects a tough matchup against the talented and experienced Bulldogs, saying, “I expect Bridegport to be a very good team, returning 14 seniors and all of them are very good. We will need to play well against them to win.”

The Bulldogs are led by second-year Head Coach Jeremy Reimers, a Leyton graduate, and look to improve upon last year’s 5-and-4 final record, led by returning standouts Cole Faessler and Cade Loomis. Look for the Bulldogs to show speed on offense and the ability to swarm to the ball on defense. The Raiders look to counter with breakout performances by Hofrock and his receivers Zack Burke, Trever Tarrell and Connor Hartzler to put up points for Sidney.

Game time is at 7 p.m. on Friday at Weymouth Field in Sidney.