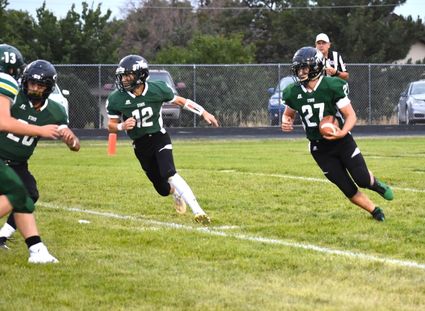 It was close going between the Creek Valley Storm and the Hay Springs Hawks in the first half during Friday night’s season opener, but the Storm showed why they’re the class of D6 football in the Panhandle by coming out in the second half and running up a 30 point lead against the visitors to earn a 68-to-38 victory.

Junior quarterback Eli Schmid went 5 for 7 with 128 yards and 4 touchdowns in the air, which was exactley what the Storm needed in Schmid’s first game as starting quarterback. Junior Lucas Trujillo and senior Justin Ningen torched the Hawks on the ground, combining for 170 yards on 23 rushing attempts with five touchdowns. Senior Oakley Hodges caught a touchdown pass and boomed 6 kickoffs deep into the endzone for no return. Ningen led the defense with 14 total tackles.

Creek Valley travels to Paxton to face off against the Tigers on Friday at 7 p.m.