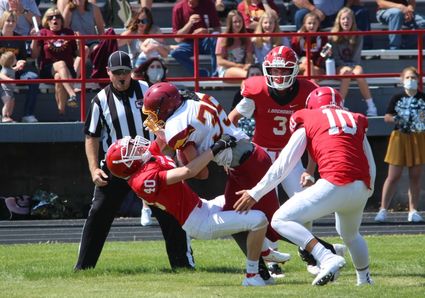 The Warriors defeated the Maywood / Hayes Center Wolves in a dominating performance, while the Longhorns were coming off a 66-to-6 opening loss at home against Hitchcock County. Leyton Head Coach Glen Lipska hoped the team’s growing confidence and ability to overcome adversity would keep their momentum going, while Longhorn Head Coach Ben Aarsetad knew the Warriors were a big and aggressive team with depth that would challenge his young team that was looking for improvement over the previous week’s performance.

Kimball received the ball first and immediately senior quarterback Christian-Allen Van Pelt directed a running attack that racked up a big yardage while the Leyton defense looked confused by the Longhorns misdirection and blocking schemes. After running for four first downs and driving into scoring position, the Warriors bit on a play action roll out and Van Pelt found junior Roy Tarango Trevizo wide open near the end zone and connected with him for a 23 yard touchdown. The Longhorns attempted a two-point conversion with Van Pelt rushing towards the corner of the end zone, but he was hit before crossing the goal line, and fumbled the ball out of the end zone and the score remained 6-to-0 in Kimball’s favor.

Aarsetad kept up the pressure with a surprise onside kick that Leyton was slow to cover, and the Longhorns recovered the ball in Leyton territory. The Warriors turned up the intensity on defense, forcing Van Pelt to try a long pass on third down that was overthrown. Leyton’s offense started on their own 32 yard line after the punt, and could not get any type of drive going. After a good punt, Kimball gained 6 yards on three runs, but on fourth and four, Van Pelt was tackled for a loss giving Leyton the ball back.

The Warrior offense then started to move, led by the rushing attack of junior Kole Bush. The Warriors gained momentum when on a fourth and nine, Bush caught a pass by junior quarterback Scout Gamble and ran up the sideline, spinning out of a tackle by senior Ethan Ratzlaff then running over Kimball senior Cole Henton and stretching for a first down. Junior Ethan Eckhardt cashed in a few plays later with a four yard touchdown run followed by a point after pass that gave Leyton the lead at 8-to-6.

The Warrior defense then took over the game, highlighted by the defensive end play by juniors Jonathan Borges and Matthew Monheiser, who both continually harassed and disrupted Van Pelt and kept the Longhorns from mounting any serious offensive threats. On the next Leyton possession, on a third and two senior Zack Henke beat the defense to the outside, and rumbled from Leyton territory all the way down to the Longhorn’s one yard line.

Henke blasted up the middle on the next play for the score, and a successful point after kick put the Warriors up 15-to-6 at 9:44 of the second quarter.

The Warrior’s defense played so well, Leyton endured three consecutive turnovers-two fumbles and an interception- without the Longhorns being able to convert any of the turnovers into points. The Longhorn’s offense was able to pull off a few big gains, but could not sustain a drive like their first of the game, and went into the intermission down by nine. It was Kimball’s Homecoming Weekend, and Van Pelt and senior Ashlyn Guzman were crowned Homecoming King and Queen.

The halftime festivities did not change the fortunes of the Longhorns, as they tried another onside kick to start the second half that was recovered by Leyton. The Warrior offense started to push the Longhorns around, opening big holes and Bush and Henke charged forward for big gains. Gamble broke free for a 13 yard scamper into the end zone, and then after the kick the Warriors were in control at 22-to-6. The Longhorns were unable to drive the ball against the Leyton defense, and the Warriors opened up a bigger lead when Gamble found junior Mason Reimers open and connected for a 55 yard catch and run to extend the lead to 29-to-6.

The heat affected both teams, with Leyton’s Zack Henke missing time and Scout Gamble battling cramps, while the Longhorn’s smaller roster struggled to keep fresh players on the field.

The game continued with the Longhorns unable to maintain a drive, even when breaking a play open for a big gain. The Warriors continued to run the ball effectively, and continued to score while the Longhorns could not capitalize on any break. After Bush broke open a 72 yard touchdown run to increase the Leyton lead to 43-to-6, a 35+ point mandated a running clock.

Even with time running, Leyton managed another score when freshman quarterback Peyton Abott substituting for Gamble drove the Warriors down the field and capped the drive with a seven yard touchdown run to end the game with a final score of 49-to-6.

Bush led the offense with eight rushes for 124 yards and a touchdown. Henke had two rushing and one receiving touchdowns. Leyton gained 13 first downs while turning over the ball five times, three fumbles and two interceptions.

Kimball rushed 44 times for only 79 yards, with Van Pelt carrying 24 times for 63 yards. Van Pelt went 4-for-11 in the air for 90 yards, with two big receptions by junior Brayden Schildhauer accounting for 67 yards of the total.

After the game, coach Lipska said, “We are becoming confident and we’re learning from our mistakes, but we’re taking everything week by week.”

Leyton faces Bayard in Dalton on Friday, and Lipska knows the Warriors will face a big challenge, saying “Bayard is a very good football team, and I think they have a solid passing attack, it’s something that we have to concentrate on the defensive side of the ball. On our offensive side, we just need to work some little things out, and make sure everybody is on the same page.”