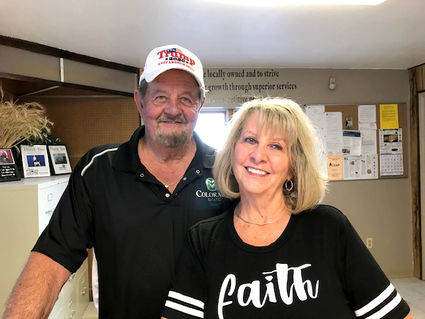 The day starts with the Fireman's Breakfast starting at 7 a.m. at the fire hall. The craft fair is scheduled for 8 a.m. to 2 p.m. The parade is set for 10 a.m. with a hamburger fry starting at 11 a.m. A Money Scramble and a Tractor Pedal Pull both begin at 11:30 a.m. and the high school football game with Flagler begins at 1:30 p.m.

This year’s “2020 For Peetz Sake” Parade Marshalls are Jack Hume and Sandie Kerr who have been together for 25 years and married for 16 years. Jack was born in Sidney, Nebraska and lived at Peetz. His family moved to California and lived there for 10 years.

They moved back to Colorado and lived in the community of Crook where Jack graduated from high school. He went on to NJC and then worked for Mountain Bell/US West for 34 years. He then began working for Sandie at Carpet Comfort Center. Jack retired after laying flooring for 12 years. He has two children; a daughter, Jeri, and a son, Scott. He has been gifted with five grandchildren and five great-grandchildren. Jack has been a life-long Elks, member, worked on Crime Stoppers and was a Sterling Chamber of Commerce board member.

Jack is enjoying retirement along with donating his time mowing the Peetz Community cemetery and town lots in Peetz. Sandie was also born in Sidney, Nebraska and lived in the Peetz Community. Sandie graduated from Peetz High School as did all of her children and both of her parents. Sandie went on to attend and graduate from NJC. She has four boys, Shawn, Dustin, Tyson and Trent. She is blessed with nine grandchildren and four great-grandchildren. Sandie worked for Peetz Co-op at the station for 1 year and also was head cook at the Peetz School, KTVS-Channel 3 TV for ten years and currently owns and operates Carpet Comfort Center for the last 25 years.

Sandie is a member of the Sacred Heart Church in Peetz where she taught religion and confirmation classes as well as played the keyboard for Sunday mass and served on the Parish Council. She is a current member of the Peetz Legion Auxiliary. While working in Sterling she started and headed the Logan County Bridal Show and is a member of the Sterling Chamber of Commerce. Sandie served on the Town of Peetz Board where she was instrumental on getting playground equipment for the Peetz Park and Christmas decorations to hang on Main Street.

Sandie and Jack are honored to be this year’s Parade Marshalls. Sandie said “The Peetz community is my heart and soul.”