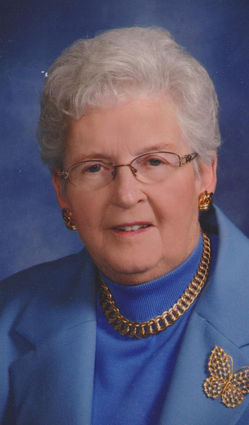 Patricia Jean Von Seggern, 85, of Sidney, passed away Tuesday, October 20, 2020, at Sidney Regional Medical Center with family by her side. Patricia was the daughter of Bernard and Eleanor McCarthy and was born on June 1, 1935, in Sioux City, Iowa. She graduated from Guardian Angels High School in West Point, Nebraska. Following graduation, she was employed by the ASCS office in West Point.

She also helped establish the WIFE (Women Involved in Farm Economics) organization and served on the Sidney Library board and the Cheyenne County Ladies Chamber of Commerce. Patricia especially enjoyed spending time with her family and grandchildren, going to dinner and movies with friends, and relaxing on the patio amongst her flowers.

Patricia is survived by one son, Thomas and wife Cindy and their children, Patrick and wife Sheila, Michael and wife Bridget and son Porter, Sara, and Kelly Robb and husband Derek; one daughter, Jean and sons Alec and wife Nichole, and Hayden; Jeffrey’s two children, Christine and Andrew; nephews, Mike and Bryan Schmoldt; and sister, Peg Webb.

Services will be at 10 a.m. Saturday, October 24 at Saint Patrick’s Catholic Church with a Rosary at 6 p.m. Friday with Rev. Mike McDermott officiating. Visitation will be 1-4 p.m. Friday afternoon at Gehrig-Stitt Chapel.

Memorials have been established to St. Patrick’s Catholic Church in Sidney and the Office of Human Development (OHD), POB 133, Sidney, NE 69162.