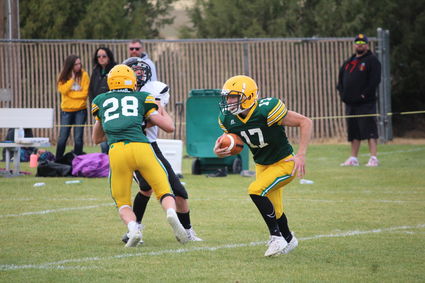 Peetz senior Aiden Curtis during recent action against Flagler. Curtis rushed for 73 yards and a touchdown in the Bulldogs' loss to Fleming Thursday night.

Fleming's Wildcat Football team showed they're still the class of the league against the Peetz Bulldogs Thursday night, handing the visiting Peetz squad its second consecutive loss by a final score of 68-to-19.

The undefeated defending State Champs got down to business quickly, piling up 24 points in the first quarter while shutting down the Peetz offense. The Bulldogs finally got on the scoreboard in the second period with a touchdown and a successful extra point, but seven would be all the Peetz boys could tally in the first half while the Wildcats poured it on with another 22 points to go up at halftime 46-to-7.

Peetz managed one touchdown in the third and another in the fourth, but the game was already out of their control, and the Wildcats cruised to 49 point victory to move their record to 4-and-0, while the Bulldogs fall to 2-and-2 on the season.

After the game, Peetz Head Coach Scott Sorensen said, "We are a young team and Fleming is looking to repeat as state champions. We are a better football team now than we were a week ago."

Peetz next faces the North Park Wildcats in Peetz on Friday, Nov. 6. Sorensen said about the match up, "North Park is a team similar to ours. They are young and inexperienced. We beat them in a close one earlier in the Colorado Rural Football League. This time it will be a judge of which team has improved the most."