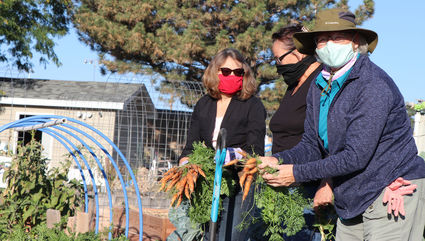 The COVID pandemic of 2020 has contributed to increased food insecurity for many Nebraska families.

In response, communities have pitched in to help. And some of the donated food is produce that has been grown this year at community gardens around Nebraska, which leverage local volunteers with grant funds from Growing Together Nebraska (GTN), part of Nebraska Extension’s Supplemental Nutrition Assistance Program-Education (SNAP-Ed) program.

Established in 2016, Growing Together Nebraska increases food security and promotes healthy food access for families and individuals who are food insecure. Extension Master Gardeners, local community organizations, and volunteers work together to build and manage donation gardens to improve access to affordable, nutritious, and safe foods. This multi-state project was formerly known as Cultivating Health Our Way.

More than a dozen Nebraska counties – Scotts Bluff, Cheyenne, Antelope, Colfax, Dakota, Dawson, Dodge, Gage, Hall, Lancaster, Lincoln, Madison, Platte and Washington – host donation gardens that bring together local Nebraska Extension staff, master gardeners and community organizations. Several of the gardens are in the Panhandle, including Gering, Sidney and Kimball. (The Kimball garden was not planted this year because it is located at the school, which was closed by the pandemic before planting season.)

Nebraska Extension educators Natalie Sehi, with SNAP-Ed, and Terri James, statewide coordinator for the Nebraska Extension Master Gardener Volunteer Program, work with project leaders from across the state to keep track of volunteers, the amount of produce donated, and the number of individuals served.

Across the state, the community GTN gardens collected and recorded 32,475 pounds raised to combat food insecurity as of Sept. 30, the end of the grant year. Since 2016, more than 89,000 pounds of produce (over 267,000 serving of fruits and vegetables) have been donated to those in need.

In the west, the Gering and Sidney gardens produced more than a ton of food to donate to local efforts.

In Sidney, this year’s GTN garden produced 448 pounds of produce that reached 112 people, according to Extension Educator Karen DeBoer. Ten volunteers worked in the garden, including a Master Gardener, one adult, four youth, and four missionaries from a local church. A portion of the produce was donated to the local food pantry in Sidney and the remainder was given to residents in a low-income housing facility. The Sidney GTN site is located in the Deer Run Community Garden. The garden is on city property and the City of Sidney furnishes the water.

The Evergreen Community Garden in Gering garden donated more than 1,600 pounds of produce in 2020, including produce that volunteers brought in. More than 40 volunteers put in 3,832 hours of work, according to Tammie Ostdiek, Extension Educator.

The site and water for the Gering garden are provided by the City of Gering, and in addition to the donation garden, the site also includes a greenhouse, flower garden, fruit trees and a picturesque arboretum. The garden is managed by volunteers Carol Knaub and Tina Luz, who coordinate additional volunteers from local master gardeners and other organizations.

Knaub and Luz start plants from seed in the greenhouse. Produce is harvested regularly during the season, then distributed to the First Baptist Church at Scottsbluff and Gering Methodist Church. Any extra produce goes to soup kitchens at the Guadalupe Center in Scottsbluff or First Presbyterian Church in Scottsbluff.

Growing Together Nebraska also includes a nutritional education component. Ostdiek was planning to do a program on using multi-cookers, but the pandemic prevented having a face-to-face event. She does distribute SNNEAK sheets with the produce. SNNEAK (Seasonal Nebraska Nutrition Education Activites Kit) sheets have information to educate people about growing fresh vegetables at their homes and recipes for including them in meals. Recipe cards also go out with the produce.

The pandemic has increased the need for food assistance and changed how food gets distributed. It also has changed how the volunteers work together at the community garden. The Nebraska Master Gardeners program provides a list of best practices for community gardening that includes hand-washing stations, bringing their own tools to use, social distancing, limiting the number of volunteers present at any time, and staying home when volunteers feel ill.