Storm Bounces Back With Big Win 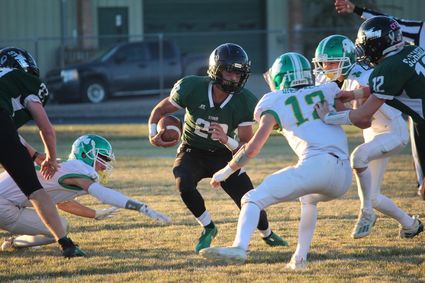 Creek Valley’s Storm Football team rebounded from their 66-to-13 loss against Potter-Dix with a convincing 40-to-16 win over the Spalding Academy Shamrocks, shutting out the visitors for three quarters as they advanced to the second round of the NSAA D-6 playoffs.

Spalding received the ball first, and was able to gain a first down to mid-field, but then were stopped by the Storm’s defense and turned the ball over on downs. Creek Valley immediately got their running game going, and after three runs brought them to the Spalding nine-yard-line, junior Lucas Trujillo blasted up the middle for a touchdown. Senior Oakley Hodges converted the point after kick, and the Storm took an 8-to-0 lead.

After Spalding earned a first down on their next drive, Storm junior Drew Fraas grabbed an interception and rumbled down inside the Shamrocks’ 10-yard-line. The run was called back on a penalty, forcing the Storm to start at midfield, but that just delayed the inevitable as a big run by senior Justin Ningen brought the Storm down into scoring position. Trujillo followed up with a sweep run to the right for a touchdown, and another Hodges successful point after increased the Creek Valley lead to 16-to-0.

Spalding was able to move the ball, but kept erasing their gains with penalties. A series of losses and penalties on their next drive backed the Shamrocks up to their own two yard line, and they punted back to the Storm who then took over at midfield again. The Shamrocks finally stopped the Storm offense, holding Hodges to a 10 yard pass reception on fourth down and 11. The Shamrocks started to move again, but multiple penalties against the visitors forced a turnover on downs.

The Storm moved the ball again, recovering from a block in the back penalty that brought them back to midfield after a big reception by Hodges. The Storm had first down inside the five yard line, but could not convert and turned the ball over on downs deep in Shamrocks’ territory.  Spalding was able to move the ball out of the shadow of their own goal post, and converted a big pass when defender Justin Ningen mis-timed an interception attempt and the Shamrocks earned a first down on the Storm’s 24 yard line. A big run brought the Shamrocks down to the two yard line, but then a fumbled pitch was jumped on by the Storm, and Creek Valley took over on the 18 yard line. 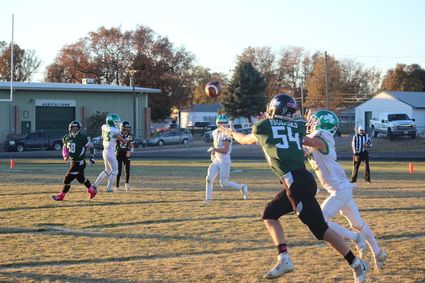 Creek Valley started to move the ball again, and Hodges made an incredible catch on the right sideline, battling with the defender and juggling the ball before finally securing the catch and advancing to the five yard line. Ningen then burst through the middle for the touchdown, and another successful point after by Hodges gave the Storm a 24-to-0 lead with three minutes left in the half.

A big third down sack by Trujillo forced a punt on Spalding’s next possession, and although the Storm were unable to punch the ball in for another touchdown before the half ended, the game was settled at this point with the Creek Valley lead.

Spalding was only able to manage two scores in the fourth quarter when the teams were freely substituting, countered by the Storm’s two touchdowns in the second half. The convincing 40-to-16 win sends the Storm to the second round of the playoffs, traveling to face the number 1 seed Arthur County Wolves in Arthur on Friday.