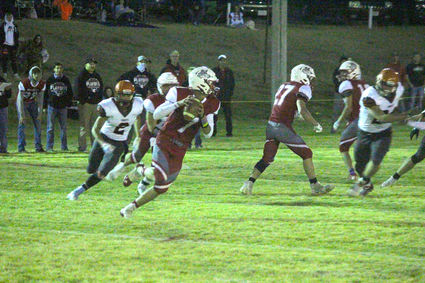 The Potter-Dix Coyote Football team had their season end Friday night with a 42-to-8 loss against the Cody-Kilgore Cowboys at Combs Field in Potter.

The Coyotes could not stop the lightning and thunder combination of speedy running back Peyton Sterkel and the bruising running of big back Tucker Ravenscroft, giving up 375 yards rushing in the loss.

There was a lot of energy prior to the game, with the Coyotes coming out of a WWII truck to take the field for warm-ups, cheered on by a big crowd at Combs Field. The Cowboys also brought a large cheering section with them, despite the four-plus hour drive to get to the contest.

The game started with Cody-Kilgore on offense, and after a few runs, junior Peyton Sterkel blasted through the Coyotes’ defense and ran 45 yards for a touchdown, giving the visitors a quick 6-to-0 lead after an unsuccessful point after attempt.

After a booming kickoff resulted in a touchback, the Coyotes struggled to gain yards in their first possession. Sophomore standout quarterback Luke Kasten scrambled and connected on a third and long play, giving the Coyotes a fresh set of downs. But their drive stalled at midfield on a turnover on downs. The Coyotes’ defense held to force a turnover on downs by the Cowboys, but on next possession, Kasten threw an interception that was returned deep into Coyote territory. Two plays later, Cody-Kilgore’s big junior running back Tucker Ravenscroft plowed into the the end zone for his first of four touchdown runs, and the Cowboys took a 12-to-0 lead.

Potter-Dix moved down the field to the Cowboy’s 10 yard line with two big passes by Kasten, but were stopped when a Kasten pass to junior Jared Anton was intercepted at the one yard line. The Cowboys moved the ball from out of the shadow of their own goalpost, but were forced to punt back to the Coyotes. Potter-Dix was unable to move the ball again, and turned it over on downs. The Cowboy’s speedy defenders chased Kasten in the backfield all game, never letting him get off a clean pass, while limiting his scrambles.

Again the Cody-Kilgore running game took over, churning out yardage while draining the clock on a long drive that ended with another Ravenscroft blast up the middle for a touchdown, and the Cowboys led 22-to-0, and the Potter-Dix team started to look deflated and outmatched. Trying to contain the Cody-Kilgore rushing attack, junior Gage Davis broke through for a big 30 yard run to set up another Cowboy’s touchdown, this time with Ravenscroft running over Coyote tacklers as he plowed his way into the end zone. The Cowboys went up 28-to-0 at halftime.

The Coyotes continued to try to give Kasten time to find receivers, but the Cowboy defenders exerted tremendous pressure and contained the Coyotes’ passing attack. In the third quarter, Kasten was sacked for a loss and injured on the play and was replaced by freshman Braydon Kasten at quarterback.

The Cowboys continued to run the ball while forcing Potter-Dix turnovers. The Coyotes were able to manage one touchdown in the fourth quarter, but the Cowboys held the ball and kept their running game going, draining the clock and taking the 42-to-8 victory.

After the game, Potter-Dix Head Coach Dale Frerichs said, “It was a tough way to end the season. Cody-Kilgore had a good game plan that their kids executed well. Their size gave us some problems. We turned the ball over too many times, which is something we had been doing a good job of in our previous games.”

The Coyotes kept turnovers limited all season, but were intercepted four times in the game, which limited their scoring.

Frerichs was pleased with the season and said, “This season we did a lot of great things that our kids, school and community can be proud of. We made a lot of great memories as well. We will miss our seniors, they put a lot of time and effort into the program over their years here.”

The Coyotes end the season with a 9-and- record, and look to be positioned well for a return to the playoffs next year.

Cody-Kilgore moves on to face the McCool Junction Mustangs on Friday.