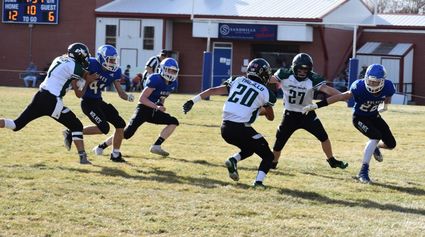 Creek Valley’s Storm Football team ended their season with a 55-to-38 loss to the Arthur County Wolves in the quarterfinals of the D6 State Football Playoffs Friday afternoon.

After defeating the Wolves earlier in the season in Chappell, Creek Valley traveled to Arthur for their playoff matchup against the Wolves, but 19 unanswered points in the second half put the Wolves on top for good, and ended the Storm’s season with a 7-and-3 record.

The Wolves had built a 28-to-14 lead in the second quarter, but Creek Valley senior Oakley Hodges forced a fumble that was recovered by Storm junior Lucas Trujillo, and after the Storm offense drove down to the Wolves’ goal line, a short pass caught by Hodges netted a last second score for Creek Valley. Hodges booted the point after kick, and the Storm trailed 28-to-22 at the half.

Creek Valley started with the ball in the third quarter and drove down the field, powered by a big pass play from junior quarterback Eli Schmid to senior Justin Ningen that brought the Storm into scoring position. The Storm capped the drive with a pass to Hodges on third down and long, and the big senior broke tackles on his way to the end zone. After another successful point after, the Storm held a 30-to-28 lead.

Creek Valley then got another break when Arthur County standout senior running back Alex Worthing fumbled deep in Wolves’ territory and Storm junior Drew Fraas jumped on the loose ball. But after many attempts, the Storm could not punch the ball into the end zone. On a fourth down attempt, Ningen fumbled the ball while scrambling and Arthur County junior Edward Daly scooped the ball up and returned it all the way for a Wolves’ touchdown, and Arthur County took the lead 34-to-30.

Creek Valley again drove the ball deep into Arthur County territory, but could not convert on a fourth and one, and gave the ball back to the Wolves. Worthing took over with two big runs to bring the the Wolves down the Creek Valley 10 yard line as time expired in the third period. In the beginning of the fourth quarter, Arthur County sophomore Lance Vasa blasted through for a touchdown, extending the Arthur County lead to 40-to-30. Creek Valley started on offense again, but Schmid overthrew Hodges on a pass play, and Arthur County’s Worthing intercepted the pass and returned it deep into Creek Valley territory. Vasa again ran for a touchdown, and the the Wolves then took a 17 point lead at 47-to-30. Each team scored one more time to bring the final score to 55-to-38.

Arthur County’s Alex Worthing rushed 14 times for 188 yards and two touchdowns while quarterback Bryce Hanna completed eight passes for 138 yards and three touchdowns. Arthur County next faces Sterling on Friday at a location yet to be determined.