Peetz Ends Season With A Loss 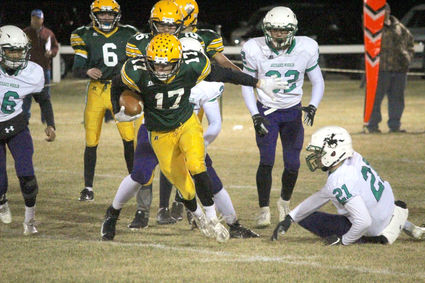 Peetz’s Bulldog Football team finished their regular season Thursday night in Peetz with a 60-to-14 loss to the visiting Arickaree Indians. The COVID-19 shortened season, with its quirks and scheduling challenges, gave the Bulldogs the option to play one more game after their loss to Prairie on November 13 after not qualifying for the playoffs. After a team meeting, Head Coach Scott Sorensen’s 2-and-4 squad overwhelmingly wanted to play just one more game, and scheduled the match-up with 3-and-3 Arickaree. A depleted Peetz squad, absent seniors Sterling Sorenson and Nolan Hill and junior Ryan Schilz, suited up one last time to simply enjoy playing the game.

Play started with temperatures in the mid-40’s and a stiff cold breeze and Peetz receiving the ball. Arickaree’s speedy defense shut down the Peetz running game, and the Bulldogs turned the ball over on downs, giving the Indians good field position. A few runs later and the Indians hit pay dirt and took an 8-to-0 lead. Again the Bulldogs, desperate to gain offensive momentum, turned the ball over on downs again and Arickaree started on the Bulldog’s 22 yard line. But on their first play, Peetz senior Aiden Curtis leaped high and pulled down an interception. Peetz then started to move the ball, with Curtis breaking out a big run to the 35 yard line. But Curtis then threw an interception of his own, and the ball was returned for a touchdown and an Arickaree 14-to-0 lead.

Curtis received the ensuing kickoff, and had another big return nullified by a penalty. The Bulldogs just could not handle the speed of the Indian’s defense, and the Bulldogs were force to punt. The kicked ball was caught in the wind, and blew backwards then hit the ground with an Arickaree roll, and the Indians took over on the Peetz 10 yard line. The Indians then scored again a 10 yard touchdown run, and Peetz was down 20-to-0.

The lone bright spot of the half occurred when Peetz had the ball near midfield, and Curtis ran for tough yards up the middle. The Indians thought they had him down, but Curtis continued to churn his legs and broke away for a 42 yard touchdown strike, and the Bulldogs scratched their way on the board at 20-to-6. But that was pretty much the last highlight the Bulldogs had, as they went scoreless until late in the fourth quarter when sophomore Colton Howell caught a 10 yard touchdown pass from freshman Noah Naegele to bring the final score to 60-to-14.

Curtis had a standout performance in his last game of his high school football career, rushing 13 times for 126 yards, including a 42 yard touchdown run and an interception. He also returned three kickoffs for 46 yards. Although Peetz finishes the season with a 2-and-5 mark, even having a season at all should considered a success when no football was scheduled to be played when school started this year.